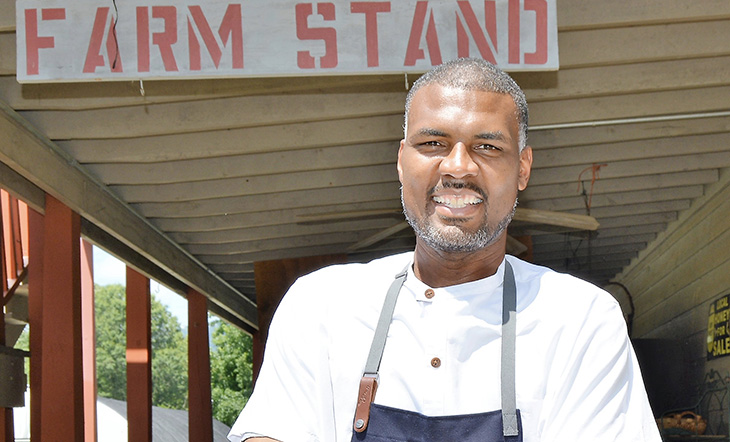 Each year, the James Beard Foundation awards numerous Jean-Louis Palladin Professional Work/Study Grants (JLP grant) to working chefs eager to expand their knowledge across the country or abroad. Recipients receive funding to spend time alongside master growers, producers, and food artisans; to study under renowned chefs in America and around the world; and to pursue specialized skills. Below, one of our most recent grantees, Kenyatta Ashford, details the inspiration behind his application for a JLP grant, and the journey through the South and across the Atlantic that has furthered his desire to make his heritage the foundation of his personal cuisine.

As many African-Americans of my generation may attest, growing up in the late 20th century left me without a firm connection to my African roots. The most glaring reminder of my ancestral roots is my name Kenyatta (Ken-ya-tuh). My namesake is Jomo Kenyatta, the first president of Kenya when it gained independence from its colonial rulers. I’ve always taken pride in the origin of my name and its uniqueness. I was once told that Jomo did for Kenya what Martin Luther King Jr. did for the United States—each fighting to make their respective countries egalitarian for all citizens. But still, when I introduce myself to someone for the first time is, and I get that all-too-familiar question of, “What does your name mean?” My typical response is just “it’s Kenyan.”

We have known many names before we got to be American: we were “n—-s,” then “colored,” and “blacks.” But although we had yet to be valued as equal citizens, we were coveted as cooks and chefs. Slaves cooked dinner for the master on the plantation. They cooked for and served many foreign dignitaries in the White House. Long before we were American citizens, African slaves and those born from them helped to shape America’s culture from the kitchen.

I have had the desire to see and experience Africa for much of my adult life. African cuisine has been largely unexplored by American chefs, and African-American cuisine (a.k.a., food of the diaspora) has largely been limited to soul food. But Africa is the second-largest continent in the world, and its diverse landscape, people, and culture make it fertile ground for exploration through its cuisines. Since the advent of nouvelle cuisine, many chefs have made French food and the quality of its ingredients their mantra, including Alice Waters and Jean-Louis Palladin. It’s inevitable that African-American chefs below the Mason-Dixon line would follow in their footsteps and seek to trace the origins of the ingredients in their personal culinary heritages.

Read the biography of most chefs, whether they have celebrity status or not, and you might find mention that they traveled to a foreign country to work during the formative years of their culinary career. To work, cook, and experience those countries’ cuisines first-hand leaves an indelible impression, affording those chefs the great opportunity to be representatives of those respected cuisines.

Many young chefs seek to make the pilgrimage to countries like France, Spain, Italy, or Denmark in an attempt to solidify their skills and gain an added layer of experience that cannot be obtained in the classroom. Africa is the continent with the longest lineage of human society on our planet, and should be on the list of sought-after places to go to when trying to fully develop one’s culinary talents. However, up until recently that was not the case for the majority of the formally trained chefs I know in America, including myself. An awakening came to me after reading Marcus Samuelsson’s The Soul of a New Cuisine years ago: I wanted to explore the flavors my ancestors’ homeland, but it seemed daunting and intimidating. It all boiled down to resources: where does one start? How do you find people with connections to the area who can help you experience the cooking traditions that are native to that country? I didn’t know of any chefs who had done this besides Marcus and he was an already established figure in the food world at that point. How does one determine and navigate the costs and logistics of a trip like this?

As a past James Beard Foundation scholarship recipient, from time to time I would look at the foundation’s website, and eventually I came upon the Jean-Louis Palladin work/study grant. That was the moment that I began to think about traveling to another country to learn about its culture and food. After receiving the grant, I was able to put that thought to action through three very distinct experiences. First, I traveled to Oxford, Mississippi in October 2017 to attend the Southern Food Ways Alliance (SFA) fall symposium: El Sur Latino. Then, in December, I made trips to Charleston, South Carolina, and Savannah, Georgia, where chef BJ Dennis guided me through Gullah Geechee cooking and other elements of diaspora cuisine. Finally, in March 2018, I traveled to Ghana on a Roots to Glory tour with fellow chefs Jasmine Evans, Kezia Curtis, Harold Caldwell, and culinarians Ada Anagho Brown and JBF Award winner Michael Twitty.

I have been able to make countless observations while experiencing the opportunities provided by this grant. While at the SFA, I was able to reflect deeply on the importance of Latin food and culture. Although today most of the public conversation around people of Latino heritage is around the concepts of legal and illegal immigration, Latinos have contributed mightily to American food culture as farmers, migrant laborers, and cooks, making up a large percentage of the workforce in the food service industry. It should be noted that Latin food welcomes many people to the table, yet their fare is not regarded in the same light as that of European cultures.

Whether you’re talking about migrant farm workers, African slaves, or sharecroppers, all of these people came to America with their own food traditions. Over time, the hardships of their lives have been translated, finding expression in new dishes and approaches to their cuisines. All three experiences showed me how the foods of the diaspora (Afro-Latino, Creole, Gullah Geechee, and African) are all interrelated, and how my ancestors were able to keep traditions going while adapting to a new land. It was exciting to visit Savannah and see what new twists some chefs are putting on African-American soul food. However, that trip simultaneously gave me an even deeper appreciation and respect for those who are striving to keep the authenticity and traditions of their foodways alive.

I’m a French-trained chef, and a graduate of the CIA, but just as Jean-Louis Palladin was a fierce advocate for his native cuisine, I now find myself with a similar goal: I want to be able to tell the story of my personal diaspora. I want to trace back to my African ancestors from the point of view of my upbringing, the family and friends I’ve grown up with, and the food traditions connected to all of that. Increasingly, chefs across the South have focused their restaurants on celebrating the quality of the region’s agriculture. Many proudly serve ingredients only sourced from the South. But those ideals did not start there and certainly will not end here. My plan is to focus on the food culture and traditions of my ancestors while simultaneously creating new ones.

Learn more about the Jean-Louis Palladin grant, and other James Beard Foundation scholarships.