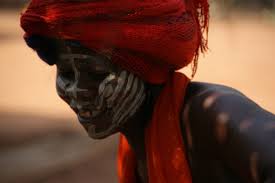 In West Africa three great empires emerged between A.D. 500 and 1600. Each had a powerful army and controlled great wealth. Those Empires were Ghana, Mali and Songhai.

Ancient Ghana was located South of the Sahara desert and northwest of the Niger river which is today referred to as Mauritania and Mali.

The capital of Ancient Ghana was Koumbi Sahel.

Thanks to the introduction of the camel into the Sahara and its increasing availability and use in Roman times in the first centuries CE, trans-Saharan trade routes (north-south) became feasible, allowing African societies in the Sahel access to the markets of the Mediterranean Sea. As these routes grew more profitable, cities such as Djenne Jeno and Gao arose and in time more complex and powerful territorial states appeared, with Ghana being the first of them.

The people who formed the Ghana kingdom were the Soninke, a subgroup of the Mande-speaking family. They called their kingdom Wagadu, but we know it as Ghana, the name the Arabs gave it. The kingdom’s golden age began around 800 CE and lasted for nearly three centuries. Ghana’s capital changed several times but the last and most famous of them was Kumbi (or Koumbi Saleh), perhpas founded in the 4th century CE. It became the biggest city south of the Sahara with some 15,000 inhabitants at its peak.

The trading activities that constituted the backbone of Ghana’s economy were the sale of gold, kola nuts (the later “secret ingredient” of Coca-Cola), and ivory to cities along the Mediterranean, in exchange for salt. The Soninke were intermediaries, as they did not control the sources of most of these products, which came from further south, while the actual transport of the goods to the north was completed by nomadic, camel-riding Berbers.

THE SONINKE CALLED THEIR KINGDOM WAGADU, BUT WE KNOW IT AS GHANA, THE NAME THE ARABS GAVE IT.
Ghana’s prosperity relied heavily on the Berber’s caravans, which were organized independently by Berber chiefs and merchants: they were the only link to the outside world. This relationship was tenuous, though, as the Berbers usually complimented their income with raids on civilized lands. Only the mutual interest in trade profit kept the relationship stable, and indeed it worked for centuries.

However, as Ghana grew richer and expanded its territorial base, tensions with various tribes of Berber merchants grew as well. The Berbers resented the increasing power of trading cities, dominated by the Soninke. With the conquest by Ghana of the independent and important city-state of Audaghost, relations became much more hostile. At the dawn of the 11th century CE, the Berbers, who used to be the masters of Audaghost’s commerce, repeatedly attempted to free the city from Ghana’s control.

In the mid 11th century CE, the Almoravid dynasty of Morroco (r. 1040–1147 CE) began to attract large numbers of Berbers, thus providing a more solid form of organization and unity to the otherwise conflicting Berber clans. The Almoravids became powerful enough to launch conquest campaigns abroad. To the north they invaded Spain (Al-Andalus), defeating the Caliphate of Córdoba (r. 929-1031 CE). To the south, the Almoravids brought havoc to Ghana, even conquering the capital city, Kumbi, in 1076 CE. Although Ghana was eventually able to expel the invaders, the damage was staggering. Ghana’s networks of trade were perturbed (Audaghost quickly lost all importance, for example), but also the introduction of Berber’s pasturing flocks in what used to be agricultural land, initiated a terrible process of desertification.

Ghana would not recover its former glory and the following decades saw further decline as subject peoples broke free from the kingdom’s control. In 1203 CE, Kumbi was taken by one of their former subject peoples: the Susu. In 1240 CE, the kingdom collapsed when the Kumbi was devastated yet again and the heart of Ghana was annexed by the rising Empire of Mali (c. 1230-1600 CE).

The wealth of ancient Ghana is mythically explained in the tale of Bida, the black snake. This snake demanded an annual sacrifice in return for guaranteeing prosperity in the Kingdom, therefore each year a virgin was offered up for sacrifice, until one year, the fiancé (Mamadou Sarolle) of the intended victim rescued her. Feeling cheated of his sacrifice, Bida took his revenge on the region, a terrible drought took a hold of Ghana and gold mining began to decline. There is evidence found by archaeologists that confirms elements of the story, showing that until the 12th Century, sheep, cows and even goats were abundant in the region.