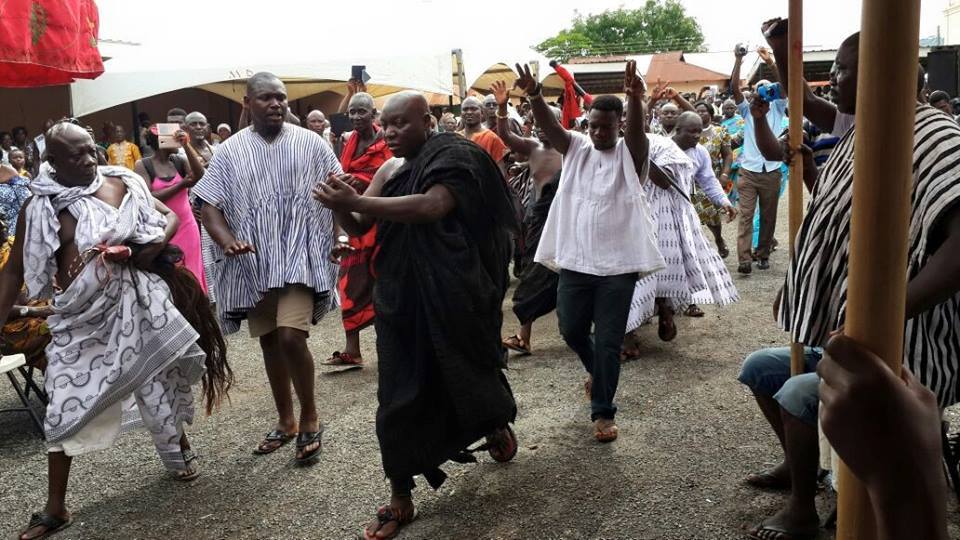 The Akwamu were among the original settlers who migrated from the Kong mountains of West Africa to the forest region of Ghana, thus breaking away from the main stream of immigrants. They settled successively at Hemang, Abakrampa, Asámankse, Nyanawase and finally crossed to the eastern bank of the Volta after their defeat by the united forces of the coastal tribes whom they had dominated for the best part of a century.

In the year 1553, the Akwamu defied the rule of the King of Denkyira and moved to Asamankese. It was during the flight from Denkyira that a section of the ethnic group broke away and settled in the Ivory Coast where they later assumed the name of Agni or Anwi or Sanwi.

The valiant deeds of these warlike people, who are said to have fought as many as sixteen battles between 1553 and 1872, are known beyond the boundaries of Ghana. In fact the bunch of keys now held as part of the regalia of the Paramount Chief of Akwamu is a tangible proof of their prowess, for it is the prize they carried away after the occupation of Christiansborg Castle for 14 days by one of their captains, Asamani. Truly has it been said that anyone who attempts to recall the heroic deeds of the Akwamu will continue to talk “until the cows come home”.

Throughout their travels and settlements, the people of Akwamu never forgot their ancestral leaders and national gods that led them and brought them safely to their present home.
The people of Akwamu celebrate the Odwira or Apafram every year on the fall of the ninth Adae. This festival has a three-fold significance. First, it is a period of remembrance: a time when the people are reminded of the warrior kings who helped to found their state. It is also a time when the chiefs and their people bring sacrifices to their gods as thanksgiving for the mercies of the past, and ask for protection for the future. Above all, it is a time when people come together to renew their family and social ties. In other words, it is a political, religious and social festival.
The celebrations last a whole week, beginning on the evening of Friday. The Saturday following the Friday is called the Odwirahuruda or the day that brings in the Odwira. It is a day of national mourning and fasting. The Omanhene goes first to his father’s house and then to his mother’s to pour libation to his departed relatives. All the Clan Heads do likewise. After this the Omanhene, his sub-chiefs, captains and state executioners form a funeral procession and parade through the streets to a sacred place called Akyerernade, where the Omanhene pours libation upon the relics generals or chiefs or important peop killed in ancient battles.
Sunday is the most important day. On that day the warriors of Akwamu meet in battle array to present arms to their captain. This martial parade, which starts in the early morning, is followed in the early afternoon by a rally of state executioners who are to play quite an important role in the ceremonies that follow.
At one o’clock the Akrahene or the chief of the soul-washers who are responsible for the cleansing of the soul of the chief leads a band to the Volta and fills covered brass pan with water from the river. He brings it home under the shelter of a state umbrella, preceded by state sword-bearers, and takes it to the house of the Kyidomhene, Chief of the Rear guard. This is the water with which the Omanhene is to cleanse his subjects.
The crowd of celebrants and spectator swarm up to the open courtyard in front of the palace, to await the Omanhene, who is now busy putting on battle dress.

Meanwhile the talking drums are sounding the praises of the chief:
Tweneboa Kodua, the flint that sparks off trouble,
Divine Drummer,
Drummer of the Mighty one, Who hails from time immemorial, Who will say
Who will say
Tall Ampoma the Drummer, Son of Ansa Sasraku’s sister, Mighty one, Condolences!
Mighty Akoto the Warlord, Ansa Sasraku Ansaa,
Bestir yourself,
He who is sought for an ally,
Tall Peasa,
King of Akwamu Gyampontwea Aniapam,
King of the Gyampontwea,
Whence do you proceed, Akoto?
You hail from Kokofu,
Ruler of Ampoforoantwi,
Captor of Kings,
The Mighty one who conquers the Mighty,
Mighty Akoto, the Warlord, Who captures Kings,
Akoto whose name befits his fame, Akoto who is held in high esteem by his equals,
Akoto who is first consulted before a decision is taken, Akoto, before you advance,
First look behind you.
Akoto, you are in part
As soft as the silk Cotton tree,
In part as hard as the Odum tree,
In part as brittle as the Akakapempen tree,
Akoto, except the skies above, Except the Earth below, Except the mighty Ocean, Agyekum Asare, the little tree squirrel,
Liken yourself not to the squirrel
For the tail of the squirrel is very, very holy.
Odokurokosi who killed Atipei,
If you have saved me,
Deliver my child too.
It was you who, by cunning, Killed Ahwewaben
At Kwabea Nketea.
He who led says:
‘I did not meet Akoto’.
He who brought up the rear says:
‘I did not meet Akoto’.
He who went in between says:
‘There goes Akoto’. Akoto, you are a bear,
You are invincible.
Akoto, he who tracks you will exhaust his gunpowder;
Mighty one, Condolences!
Condolences! Condolences!

As soon as the final notes die away, the Omanhene appears at the top of the flight of steps wearing “the cap of the devastator”. This is made of leopard skin surmounted by the feathers of the eagle, and two horns, with a crown of solid gold. He wears a battled dress studded with talismans. His shoulders are smeared with red clay and a bullet wallet is strapped across his left shoulder. Six doubled knives also hang down the same shoulder His eyes are as red as blood. “The Chief of the Rear-guard” steps forward with the basin of water from the Volta and the Paramount Chief takes three handfuls into his mouth and spouts them out. He then sprinkles some of the liquid upon himself and upon the crowds who bow down in obeisance and shout “akos”, meaning blessing! Next, the priest of Mfodwo presents him with water from the god, which he uses in a similar manner. Then follows a calabash full of water from the god Mpem Kwadwo. This contains three knots of green grass. He picks one up and places it between his teeth. Then follow the waters from the Obohene and Totoabo. Mfodwo, Mpem Kwadwo, Obohene and Totoabo are all gods of war. Finally, there is water from the Odaasikyi, the god of cataracts and falls that capsize the canoes. When he has done with this last one, the Omanhene upsets the calabash container and places his right foot thrice upon it.

The chief now mounts his palanquin and rides to one end of the town amidst the deafening noise of drums, horns, musket firing, singing and shouting. At this stage the executioners carry their fetishes and become possessed as they sway to and fro along the course. From the end of the town the procession returns to the durbar grounds where a clearing has been made in the center for the military display by the asafo companies. The gunners march, saunter, crouch and cut capers with their flint guns in their hands. At a signal they all fire volleys into the air and reload as quickly as they have fired. This goes on for a while and then they march and counter-march, elbowing the crowds away in utter disregard for the safety of the women, children and any spectators who are now milling around in praise of the chief.

Bands of women dressed in white move from one end of the grounds to the other, singing and dancing and once in a while running to the Omanhene to fan him with their stoles and sheepskins to demonstrate their affection and loyalty.
The Omanhene now rises up and, holding his war-sword, advances majestically before the Adontenhene. He renews his oath of office and pledges his service and protection to the state and all those who hold him as their ruler. He swears to the following effect:

The drums then peal forth the Omanhene’s praises and he walks back to his seat to the rhythm of mpintin drums. He presents rum to his chiefs and subjects and then the crowd disperses.
The final ceremony of the day follows at about seven in the evening. An hour before that time, gong-gong is sounded to warn the people to stay indoors. A great hush descends upon the town. And why, one asks? The answer is not hard to find for soon the muffled notes of the small drum, that herald the approach of the “messengers of death”, the executioners, become audible. They die away in the distance and the phantom figures of the executioners recede into the dismal gloom of the night. They are on their way to the foot of the hills to the south of the town, those sacred hills that enshrine the mortal remains of past rulers of the state. Every soul is cowed with fear and doubt. In fact the very air is charged with anxiety over the result of this ritual that will determine the welfare of the state in the ensuing year. At the stroke of eight, a shrill voice pierces the stillness. It is the voice of the Chief Executioner calling upon the Odwira spirits. As soon as his voice dies away, a distant voice shouts in response. Shouts of joy come spontaneously from the people, as if they had all been set off by machine. But soon they are hushed again. The mystical voice that has just been heard was that of the male Odwira Spirit.
There is yet the response of the female to pray for. Again the Executioner’s voice goes up and once again comes the audible response. A gunshot is heard from the distance and soon there is a stampede past the palace where a vigil is being kept. It is the executioners running home after consulting the Oracle of the Odwira festival. Everyone is now assured of a happy year for the spirits have, by their clear responses, accepted the invitation of the living to join with them in celebrating the past and calling in the new year.