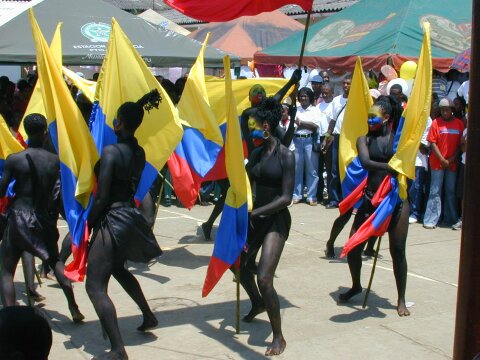 The following is a speech given by Luis Gilberto Murillo,

The American Museum of Natural History,
The Colombia Media Project and
The Caribbean Cultural Center

First of all, I want to thank the American Museum of Natural History, the Colombia Media Project and the Caribbean Cultural Center for this invitation to share with all of you some background on AfroColombians, the State of Choco, our present living situation and the challenges we face today.

Secondly, I would like to highlight the presence of several AfroColombian national leaders here with us today. They are here in the United States for meetings related to AfroColombian week and in an effort to generate solidarity with our social and political struggle for environmental conservation, ethnic and civil rights.

It is very exciting to talk about the AfroColombians, about the Choco State, about the Colombian Pacific Coastal region and the historical struggle related to them.

As you saw in the video, we are lucky to have been born in this extraordinary territory called Choco State and the Pacific Colombian region. This is a land of contrast between poverty and wealth, between economic exploitation and cultural development, between Bogota’s historic neglect and Choco’s autonomous development efforts. Nevertheless, it is necessary to go over some historical facts regarding the African presence in Colombia, especially in this region.

Colombia’s Black minority comprises 36-40% of the national population, but is officially recognized at 26%. This means our population is about 11 million of the 42 million people in Colombia. This is the second largest population of African descent in Latin America, after Brazil.

Africans forcibly exported to Colombia and especially to the coastal areas of the country, share a common heritage and origin to their kin in other nations of the Americas. African slavery in Colombia began in the first decade of the sixteenth century. By the 1520’s, Africans were steadily imported into Colombia to replace the rapidly declining Native American population. Africans were forced to work in gold mines, on sugar plantations, cattle ranches, and large haciendas. African labor has been, and continues to be, essential in all regions of Colombia. African workers pioneered the extraction of alluvial gold deposits and the growing of sugar cane in the states of Choco, Antioquia, Cauca, Valle and Narino in western Colombia.

In eastern Colombia near the cities of Velez, Cucuta, Socorro and Tunja, Africans manufactured textiles in commercial mills. Emerald mines outside Bogota were wholly dependent upon African laborers. Other sectors of the Colombian economy, such as tobacco, cotton, artisanry, and domestic work were incapable of producing without the sweat of Africans. Slavery in Colombia was as unjust and cruel as in other parts of the Americas.

In pre-abolition Colombian society, AfroColombian slaves fought for their freedom from the beginning of their arrival to the country.

It is clear that there were strong, free African towns called palenques where Africans could live as cimarrones – that is Africans who escaped from their oppressors.

Some historians view the Choco as a very big palenque with a large population of cimarrones, especially in the areas of the Baudo River. There were very popular cimarron leaders like Benkos Biojo and Barule who fought for freedom. Black people played a key role in the independence struggle against Spain. Historians say that there were three African soldiers for every five soldiers in Bolivar’s army. Not only that, we participated at all levels of the political and military structure.

African people left an indelible mark on Colombian society, as you have seen in the video -both in terms of national cultural expression and national symbolism.

Despite these historical facts, the institution of slavery was only abolished in 1851, without any compensation to the former slaves. After the abolition of slavery, there began a period of hard invisibilization and shadow racial discrimination.

AfroColombian people were forced to live in jungle areas as a mechanism of self-protection. There, we learned to live harmoniously with the jungle environment and to share the territory with Colombia’s indigenous communities. Our AfroColombian communities developed their own living patterns, which are very respectful of the environment and emphasize social values such as peace, friendship and solidarity, rather than money and capital accumulation.

This AfroColombian way of living has enabled us to conserve our rich, biologically diverse ecosystem to the present day.

From 1851, the Colombian State promoted the ideology of “mestizaje.” This meant the necessity of mixing African and Indigenous people with white Spaniards and their descendants. The purpose was to disappear, or minimize, the historical links with Africa and pre-Columbian America. In fact, the Colombian government purposely ignored and neglected the newly free Black population.

The only way for Africans and Indigenous peoples to maintain their cultural traditions was by living in isolated jungle areas. But it was not easy. The history of Black people in Colombia is the history of a struggle for freedom and land, and against discrimination and invisibility. We have been displaced in different stages of Colombian history.

AfroColombians and Indigenous people were targets of armed actors who displaced them in an effort to take over their lands for sugar cane, coffee and banana plantations or to exploit the mineral and forest wealth characterizing the area.

In 1945, the state of El Choco was created. It was the first regional administrative black territorial division. El Choco gave Black people the possibility to begin to build Black territorial identity and some autonomous decisional making power. But, it was not enough.

The powerful people in the national government, along with others who perceived their interests as threatened by an independent Black movement, attempted to destroy the new state. They contended that Black people were not capable of governing their own territory. The national government never gave enough support to El Choco. In addition, the displacement and sacking of El Choco’s natural resources continues to this day.

During the 1970’s many Black people migrated to urban areas in search of new economic and social opportunities for their children. They did not find them. Instead, they joined the ranks of the urban poor, living in the marginal areas of big cities such as Cali, Medellin, and Bogota. Currently, most Afrocolombians are living in urban areas. Only 25%, approximately three million people, are based in rural areas, compared to 75%, or approximately eight million people, in the urban zones. This means that the African heart of Colombia has spread territorially. It also means that we can now add the myriad of problems associated with urban life to the historical social problems plaguing the rural AfroColombian population.

Only in 1991, after very strong popular struggle, did the new Colombia Constitution give AfroColombians the right to collective ownership of traditional Pacific coastal lands and to special cultural considerations. This important legal instrument has not been enough to completely address our social and developmental needs.

Now, I would like to talk a little bit about the natural environment of El Choco and the Pacific Coast. This region is one of the richest in natural resources in the Americas, and in the world. It has bountiful mining, forestry, energy, and marine resources, as well as a strategic position geopolitically. It contains mega-levels of biodiversity.

The region is one of the ten hot spots in the world. That is, it is a national and international priority for environmental conservation. In the Choco region alone, scientists have identified nearly 600 species of birds, more than in the rest of the Americas combined. There are more jungle orchids and butterflies than in the entire eastern side of the Colombian coast. Our region is the natural ecological bridge between north, central and south America. There are many species of plants and animals that you cannot find in any other part of the world. Yet, this natural wealth and the traditional communities that have safeguarded it for so long, are threatened, endangered by the expanding economic interests.

It is necessary to protect this region and its people.

The exuberant rainforest, complex ecosystem, wealth of natural resources and preservation of our ancestral traditions and culture, have not been enough to pull us out of endemic poverty. Historically, large companies have reaped the wealth of our mining and forestry resources. They have left the people with extremely poor living conditions -the poorest in the country.

This is our history, a history of State and private sector neglect and exploitation. However, many things are changing. We now use the term AfroColombians as a way to keep our cultural identity, whether we are rural or urban AfroColombians. We say Pacifico or Biogeographical Choco, instead of only Choco. We say pluriethnic and multicultural, instead of Black, indigenous or mestizo. We have rights (at least on paper) to Pacific coastal collective lands, as well as decision making power. We defend our right to self-determination and cultural, economic and political development. We have our own AfroColombian agenda at regional, national and international levels. We have different political and social expressions Much has changed in the past ten years, but it has not been enough to change our basic living conditions.

In health care, nutrition, government services, military and diplomatic service and other social issues, there is marked disparity between AfroColombians and the rest of the population.

In addition to these serious social problems, the cruelty of the armed conflict has come to our territory. Now we are the military targets of armed actors, especially paramilitary units who terrorize our population, committing horrendous massacres leading to even greater indices of displacement. Massacres have become a common event in El Choco and the Pacific region. Over the past few years, massacres have occurred in Jurado, Rio Sucio, Bojaya Quibdo, San Juan River, Naya River, Raposo River, Buenaventura, Tumaco and Barbacoas, to name a few places.

There are 1.8 million people displaced by violence in Colombia, the majority of whom are AfroColombians. The state of Choco, and the Pacific region are suffering the militarization and paramilitarization of their lands, accompanied by a strong process of deculturalization.

Armed actors are not permitting the traditional right to active neutrality, and are threatening our cultural identity and historical social structure of peace and solidarity.

Faced with formidable attacks on our cultural, economic and physical well being, the most important challenge to AfroColombians today is to build a strong alternative movement. We support all efforts towards national reconciliation based on the inclusion of all Colombians in a pluriethnic country where all cultures have the same opportunity for self-development, without violence, without discrimination of any sort, and with territorial autonomy. Black and Indigenous people need to think and plan our future independently from the rest of the nation. Now, and in the future, despite the deep troubles we are suffering today, we are the African heart of Colombia.

Colombia, as well as the rest of Latin America, cannot deny its African roots. To the contrary, we should take pride in these roots!