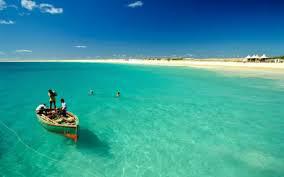 In October 2015,  Roots to Glory Tours will host a once in a lifetime experience to this beautiful Island off the shores of Africa. This trip will have it all. The beaches, the vineyards, the mountains and the history of the Africans who were taken from the mainland and brought to the Island to work for the Portuguese. In addition, we will visit local school children and do a project with them.

Some of the cities on the itinerary:

Santiago-(where the flight lands)- the most traditional island, where the Cape Verdean culture is very preserved. There you also have Cidade velha, the first Cape Verde city, and the first city created in Africa by the Portuguese colony.

Boavista- Considered the most beautiful island of the archipelago

Fogo- Beautiful mountains. The opportunity to climb a volcano is the biggest attraction in the island. You will also have the opportunity to visit the vineyards where typical Cape Verdean wine is produced

Santo Antao: Probably the most beautiful mountain island in the country, with breathtaking views . You will have the chance to visit the “trapiches” where they make “groge” the most traditional alcohol drink in Cape Verde.