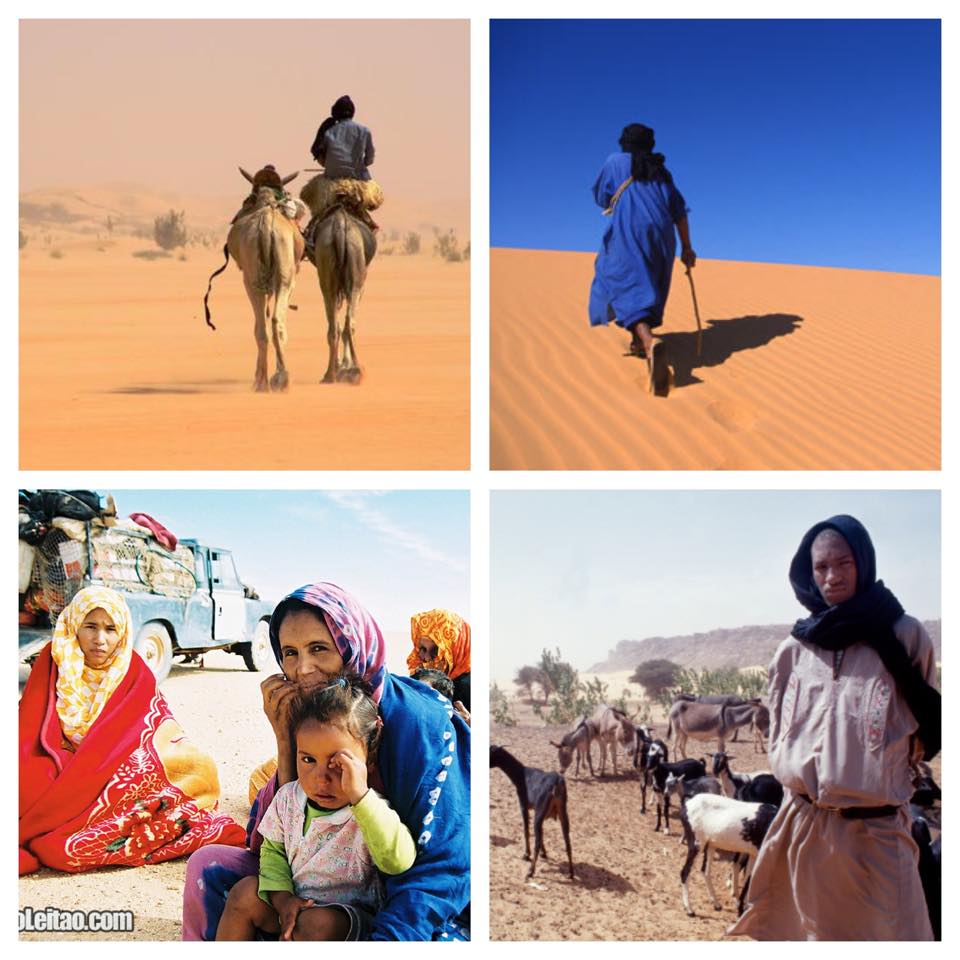 Mauritania is in West Africa. It shares borders with Mali in the south and South East, Senegal in the South, Morocco and Algeria in the North. The country encompasses 400,385 square miles (1,037,000 square kilometers), more than three quarters of which is made up of the Sahara desert. The remaining portion lies along the Senegal River Valley in the South and Southeast.

Mauritania has a total population of about 2 million people consisting of 4 main ethnic groups: Moors (white and black from Arab origins) Soninke, Wolof and Poular (black of African origin). All Mauritanians self-identify themselves as Muslims. Even if they are spiritually very open, the Muslim religion is very present in their way of life. Although a few extremists have made headlines in the past few years, extremism is not prevalent in the population. People dress in both the traditional Muslim and the western way. Alcohol is prohibited in public places although some restaurants have licenses to sell it to foreigners.

The climate is hot during the summer, July-October , and mild November-June. But in general, the weather in Mauritania is very pleasant throughout the year.

Every year tens of thousands of tourists come from Europe to visit Mauritania for the beauty of its desert, the bird parks and ancient cities.

The capital city, Nouakchott, is on the Atlantic Ocean coast. The weather is very good most of the year. The population is a real melting pot. Many people from the sub region have settled in Mauritania as result of civil unrest in their countries. Many people from Sierra Leone, Liberia, Ivory Coast, Ghana, Mali and Senegal now call Mauritania home.

Nouakchott is the capital of Mauritania. It is a sleepy town on the Atlantic Ocean. Cars share the road with donkey carts. Many people spend their weekends playing on the endless beach. Inside Nouakchott, the city center is active with entertaining market activities going on, mainly in the early hours of the day. The Cinquième district is an even better market, where handicrafts can be seen or bought.

Big restaurants such as LA SALAMANDRE, MEDINA and LE MEDITERANEEN among many others offer a variety of cuisines from Lebanese, to Chinese, Italian, Cameroonian, Tunisian and Moroccan.

The Moroccan Mosque market remains the best place to shop for fresh fruits and vegetables. A variety of cheap fresh fruit and vegetables some grown in Mauritania and some imported from Morocco are available. The waters off of Mauritania are some of the most plentiful fishing grounds on the planet. The fish market is the place to go for the day’s catch.

There are opportunities for travel out of Nouakchott, although the price of airfare is not cheap. There are daily planes going and coming from Europe and other African countries. Popular destinations for teachers and foreign families include Senegal, Morocco and the Canary Islands.