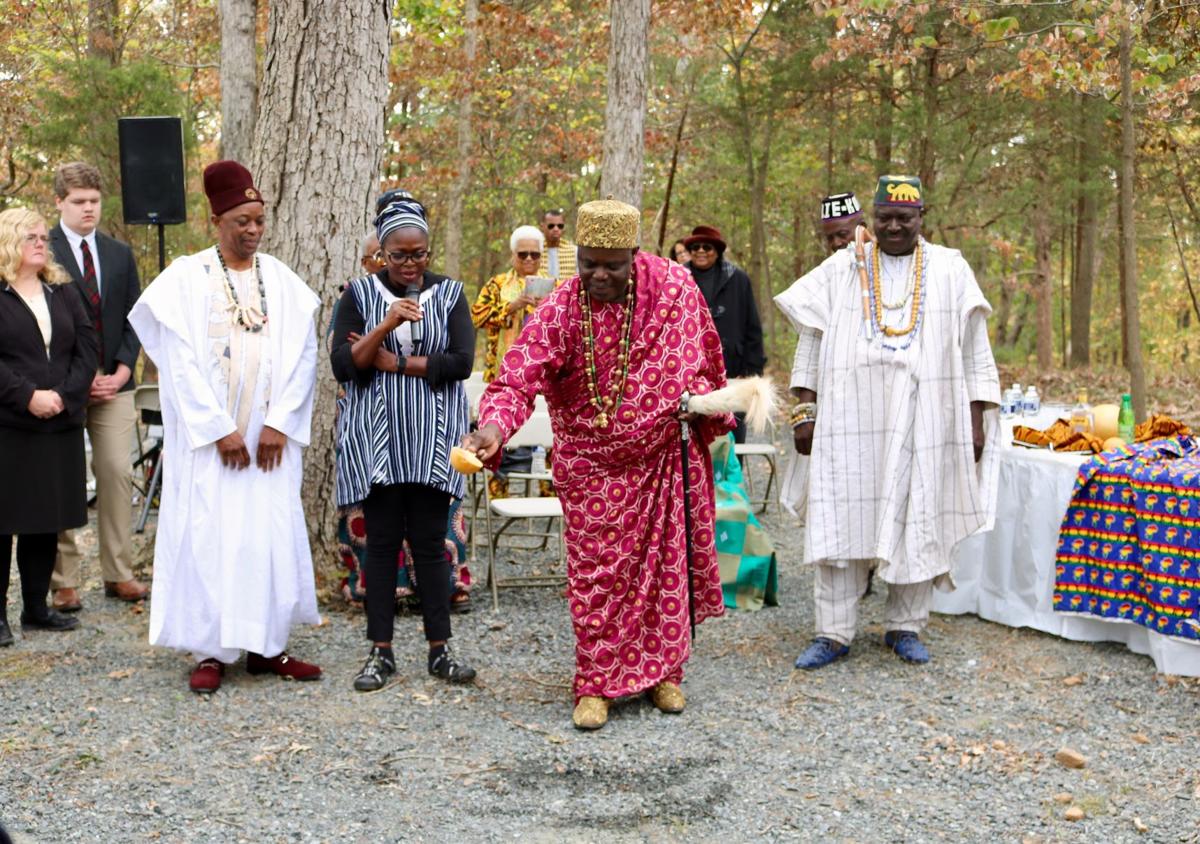 During the 18th century, the African kingdom of Dahomey collaborated with the Portuguese in the slave trade. Often under duress, African kings would capture Africans to be shipped across the ocean to forced labor in the Americas.

Hundreds of years later, a descendant of those kings visited Loudoun County to reconcile with his ancestors and his African-American relatives.

King Toffa IX of Porto-Novo, Benin, performed a traditional African blessing at the African American Burial Ground For The Enslaved At Belmont on Saturday as part of a private ceremony before a public annual wreath-laying the following day.

“I am the same as you. I am your brother,” Toffa said in French through a translator. “This ceremony is to commemorate and to remember the return to our roots … We honor [the souls of the people buried here] so that wherever they are today, they will rest in peace.”

Toffa poured water and alcohol on the ground to wake and speak to the ancestors, asking for forgiveness for his ancestors’ part in the slave trade. After speeches and an offering of gifts from several local community members, ancestral drummer Joseph Ngwa of Cameroon formed a drum circle dance made of young people and local religious and political leaders.

While the country of Benin has been run by a president and parliament since the 1970s, the political capital of Porto-Novo is home to the king. Toffa has served on multiple councils of sovereigns in Africa, and reconciliation over the slave trade is a major issue of his reign.

Toffa first heard about the nationwide American effort to preserve and protect cemeteries for the enslaved when Ada Anagho Brown, founder of Roots to Glory Tours, visited the king’s household during a culinary tour with Thomas Balch Library Commission Member Donna Bohanon.

With this year marking the 400th anniversary of the beginning of African enslavement in America, the king found it a proper time to visit. After Belmont, Toffa will travel down the East Coast to meet with African Americans of Beninese descent and bless other burial grounds.

For Pastor Michelle Thomas, founder of the Loudoun Freedom Center and president of the Loudoun County Chapter of the NAACP, the visit was both unexpected and meaningful.

“He really wanted to come … and see the resilience of the African-American community,” Thomas told the Times-Mirror. “He has brought together people across the globe now.”

Thomas and the LFC gained rights to the Belmont Cemetery, formerly part of a plantation owned by the Lee family, in 2015. While the plantation is gone, the burial ground has been preserved with help from the community and Eagle Scout Mikaeel Martinez Jaka. It now has gravel trails around the 44 known graves, rock quarry and schoolhouse site.

To Thomas, the king’s visit is especially fitting since it is the fifth anniversary of the burial ground dedication.

“In the Christian faith, five is the number of grace, and it definitely feels as if God has graced us to be able to honor our ancestors in such an authentic way,” Thomas said.

In addition to the king’s visit, the Loudoun Freedom Center on Sunday commemorated the 400th anniversary of the slave trade hitting America with the fifth annual wreath laying ceremony and observance at the Belmont cemetery.