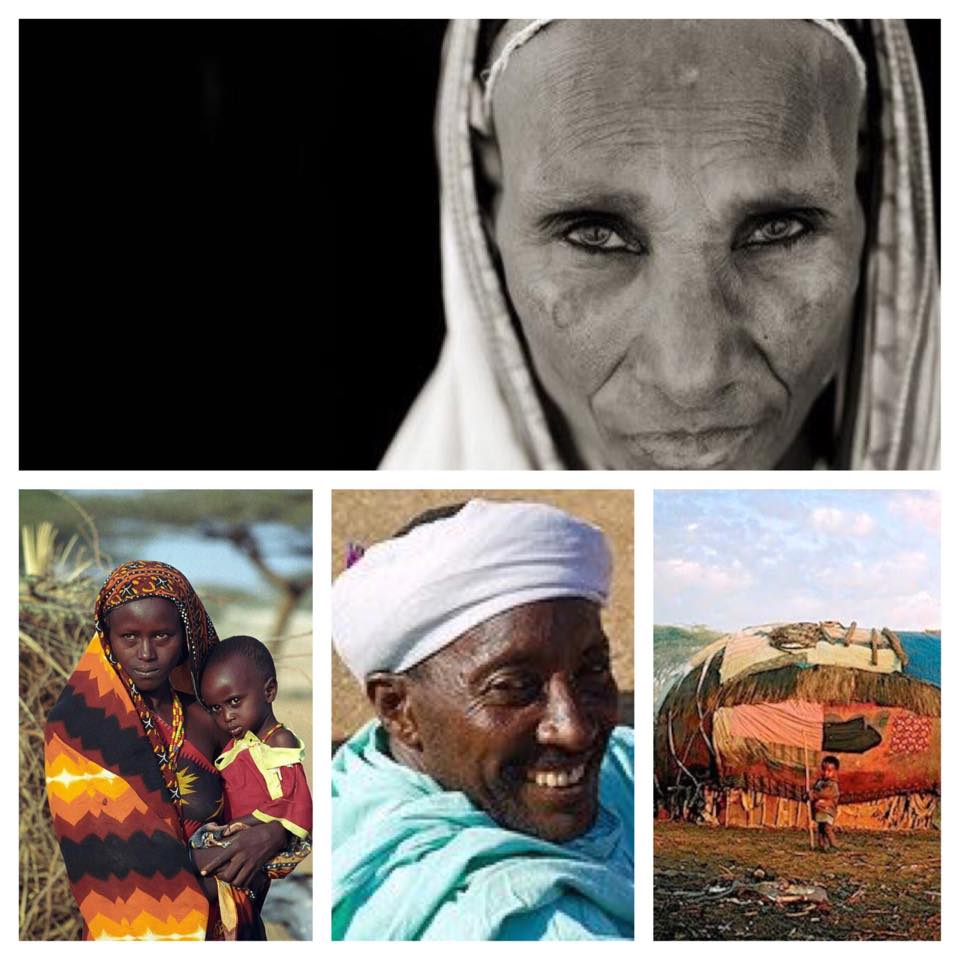 The Gabra, a nomadic tribe of 31,000 people, live in northeast Kenya along both sides of its border with Ethiopia. They are an eastern Cushitic (Oromo) speaking people who originated in southern Ethiopia. Pastoralists with a strong attachment to camels, the Gabra developed a rich culture stemming from the harsh environment in which they live.

The Gabra occupy territory east of Lake Turkana in Kenya, along the edge of the Chalbi Desert, extending to Ethiopia. Marsabit and the town of Kalacha in the center of the Chalbi Desert are both used as water holes. North of Marsabit the region grows more arid, and the terrain is strewn with volcanic boulders and sand. Two rainy seasons are separated by a hot, dry season and a short, cool one. It is during the two rainy seasons that the Gabra live most self-sufficiently and ritual ceremonies abound. The cyclical weather pattern, in conjunction with the pasture needs of the Gabra’s herds, largely determine migrations, birthing patterns, and the timing of initiation rites.

For the Gabra, to live in balance with a trying environment is to protect land, animal, and fellow Gabra. Thus, they practice certain food and plant taboos, preserve full-grown trees called “korma” (bulls), and revere pregnant women and pregnant animals. As resource managers, they migrate to the highlands during the rainy season to allow the dry season pasture to replenish its water resources.

Perhaps most symbolic of the Gabra’s identity is the proverb: “a poor man shames us all.” Since mutual support is imperative for their survival as nomands, no Gabra may be allowed to go hungry, go without animals, or be refused hospitality or assistance. A person who refuses to help others is labeled “al baku,” a stigma that stays affixed to the family for generations. The practice of camel lending exemplifies this support system.

The Gabra have a mixed-livestock economy consisting of camels, cattle, sheep, and goats. It is almost entirely based on reciprocity. Most central to the way of life and economy is the camel. When a Gabra comes into possession of a camel, it’s named to ensure the Gabra’s right of ownership. The camel will be loaned or given to other Gabra in need, and a future act of reciprocity will be expected. In this sense, camels provide great security; they also provide most of the meat and the dry season’s supply of milk. The also transport goods and water from foraging areas to surrounding villages. Selling camels and their by-products to outsiders is taboo.

Villages and camps are outside foraging grounds for several reasons: camels are unpredictable, don’t forage near their own dung, and destroy the vegetation within nine miles. The Gabra split their camps into two sites. The settlement – i”ola” – ranges from three to twenty-five huts. Satellite camps – “fora” – are smaller and far from the settlement. In fora, young men watch over part of the clan’s herds to prevent pastures from being consumed too quickly. Splitting the herd also protects it from thieves, disease, or other diaster.

Since many young Gabra men are separated from the main camp for long periods of time, marriages are often postponed. In fact, 50 percent of Gabra women are unmarried until well into their thirties. This, along with the Gabra’s postpartum sex taboo, controls the population. Living in the fora also excludes young men from the political and social activities of the main camp. Young men of herding age (19-33) qualify as “pre-adults” in men’s five-stage life cycle. The stages are (1) children; (2) men aged 19-33; (3) male political elders, a status achieved when a man marries; (4) spiritual elders; and (5) retired elders. These stages, ideally separated by eight years, are usually initiated with a long pilgrimage to the shrines of mythical founders.

Gabra life is labor-intensive, so everyone has specific tasks. Although the men decide when to migrate, women pack and unpack the camp site before and after migration. In fact, women “own” the huts and have complete authority over them. From age 7, children work six to seven hours a day, mainly tending the animals, while grandmothers largely rear and educate the young.

Men are active in three levels of political and judicial administration. The camp is run by its headman. The district is comprised of a number of camps, whose council of men decide on stock, organization, raids, defense, disputes, and assistance for victims of stock epidemics and raids. The five phratries, the largest regional group, have assemblies that serve as a mobile judicial, administrative, and spiritual hubs.

Women’s political contributions are subtle. Although they refer to themselves as children in regard to the political process, and although men demean the contributions women make, men often defer to women in certain matters.

CSQ Issue:
16.2 (Summer 1992) At the Theshold: An Action Guide for Cultural Survival

Asiko Dance of the Bassa People from Cameroon