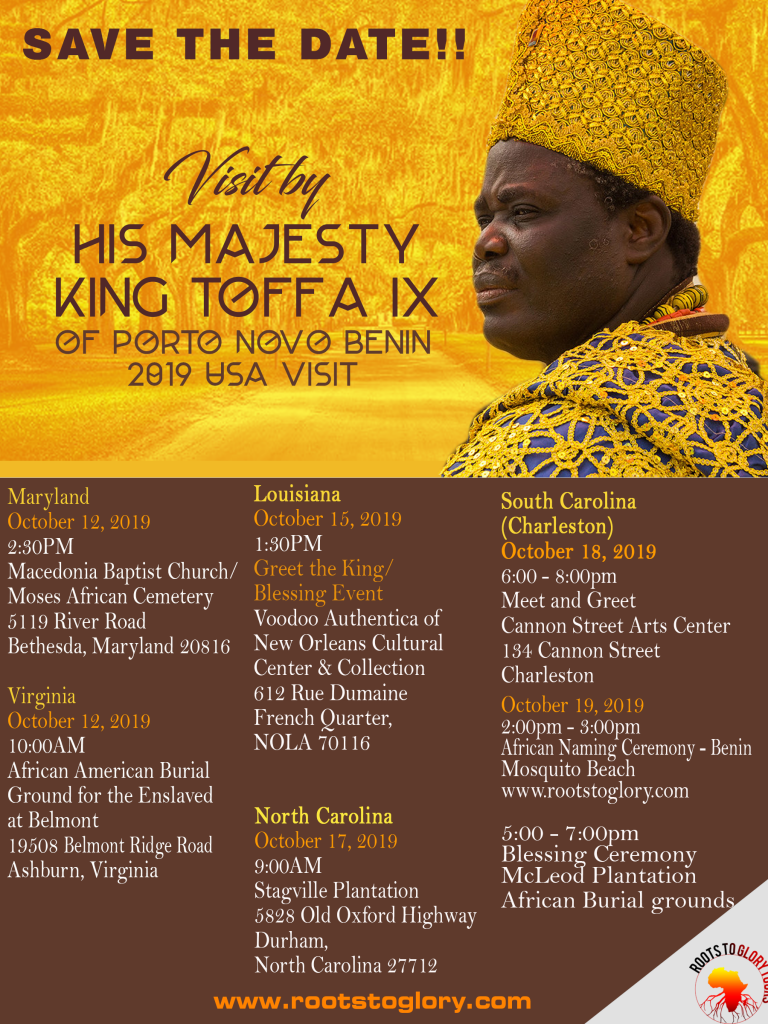 THE TOUR OF RECONCILIATION

2019 represents a critical time in African American History and Culture. Four hundred years ago, the Transatlantic Slave Trade reached the shores of English speaking North America with the first ship transporting African People as its first set of “cargo”, for bondage and servitude.

Several organizations, descendants, and diasporans across the globe have prepared ceremonies and tributes observing this year as a time to reflect, reconcile the past, and honor the strength of those who came before us. As part of this programming, Roots To Glory Tours (RGT) announces the “Tour of Reconciliation” featuring His Majesty King Tofa IX of Porto Novo Benin Republic. The tour is scheduled to take place in cities across the country in October 2019.

Thousands of Africans in the Diaspora from the Americas to Europe have embarked on the highly emotional experience having traced their ancestral roots through DNA examination. Although the DNA examinations provide clarity to ancestral roots, there is a perplexing question that is left unanswered, especially for the descendants of the Kingdom of Danxome: and that is the question of why?

It is no secret that as brutal and inhumane as the slave trade was, history reveals that the people of Danxome became active participants in selling their enemies. It is one of the cultural atrocities that leave descendants yearning to understand, process, and reconcile the past to move forward.

In a ground-breaking effort, Founder of Roots To Glory Tours, Ada Anagho Brown, has called upon King Tofa IX of Porto Novo to facilitate “Truth and Reconciliation” talks across the country. Says Roots to Glory founder Ms. Ada Anagho Brown, “The Dahomey Kingdom was instrumental in facilitating the sale of millions of Africans from the shores of Ouidah.” She further states “400 years after the first African landed in English Speaking North America it is important that those whose ancestors were involved in the slave trade meet the next generation of Africa’s children in the Diaspora for reconciliation”.

King Tofa IX represents the voice of the ancestors and present-day community members realize the significance of this “great reconciliation”, as an essential step for Africa to once again claim its place and Glory in this world.

Roots to Glory Tours (RTG) was created to be a conduit of connection between Africa and the Diaspora at large. Through its international programming initiatives, RTG guides participants through an incredible journey of reunification from African Naming Ceremonies to tours across the continent. RTG specializes in curating life-changing experiences that reconnect participants and provide a sense of belonging with a people, and to a place where their ancestors once lived, laughed, and loved. This is the ultimate goal of Roots to Glory Tours.
We would like everyone to join us at the many events he will be attending around the country, all the events are free!!
Virginia
October 12, 2019
Time: 10:00AM
African American Burial Ground for the Enslaved at Belmont
19508 Belmont Ridge Road
Ashburn, Virginia
*This cemetery is in the woods at the intersection of Rte 7 and Belmont Ridge Road. Access is on a service road off Belmont Ridge Road at Freedom Trail Road.
Maryland
October 12, 2019
Time: 2:30 PM
Location: Macedonia Baptist Church
5119 River Road
Bethesda, Maryland 20816
Louisiana
Date: Oct 15, 2019
Time: 1:30 PM Voodoo Authentica of New Orleans Greet the King/Blessing Event
Voodoo Authentica of New Orleans Cultural Center & Collection
612 Rue Dumaine
French Quarter, NOLA 70116
North Carolina
Date: October 17, 2019
Time: 9:00AM
Location: Stagville Plantation
5828 Old Oxford Highway
Durham, North Carolina 27712
South Carolina (Charleston)
Date: October 18, 2019
Time: 6:00pm – 8:00pm
Meet and Greet
Cannon Street Arts Center
134 Cannon Street
Charleston
https://www.eventbrite.com/o/roots-to-glory-tours-8180876056
Date: October 19, 2019
Time: 2:00pm – 3:00pm
African Naming Ceremony – Benin (registration is closed)
Mosquito Beach
James Island
Date: October 19, 2019
Time: 5:00pm – 7:00pm
Blessing Ceremony
McLeod Plantation
African Burial Grounds
Click here to read article about The King visit
Close Menu
×
×